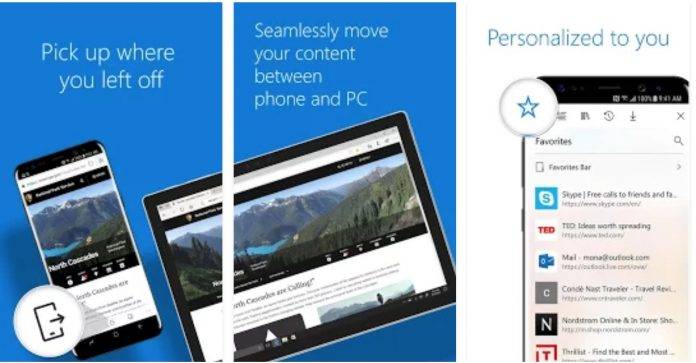 If you’re using Windows 10 on your laptop or desktop, you were probably looking for a way to seamlessly work on your browser when you transferred to your mobile device and vice versa. The Microsoft Edge browser app appeared on the Google Play Store a few weeks ago, but it was still in beta mode and warned users that it wasn’t stable yet. But now it looks like they’ve fixed the things that needed fixing as the app is now officially out of beta, and even has new features to boot.

Having a Microsoft Edge browser on your mobile device makes it easier for you to switch from your smartphone to your desktop with the “Continue to PC” feature, as it allows you to send pages back and forth. It actually uses Chrome’s Blink engine instead of the MS engine used on the desktop. The app has now lost its beta tag on the Google Play Store and so those using Windows 10 on their desktop will be able to find it even more useful on their phones.

Just a few days ago, it added new features to the app. You can now sync your passwords whichever device you’re using, as long as you’re signed in to your Microsoft account. When you first download the app, you’ll be given the option to sign in, and if you really want a seamless workflow between devices, then you should definitely sign in. The update also gave users an option to use a dark theme rather than the traditional, lighter one.

If you haven’t yet, you can download the Microsoft Edge browser from the Google Play Store for free. Expect more updates in the future as they compete with other more established mobile browsers.