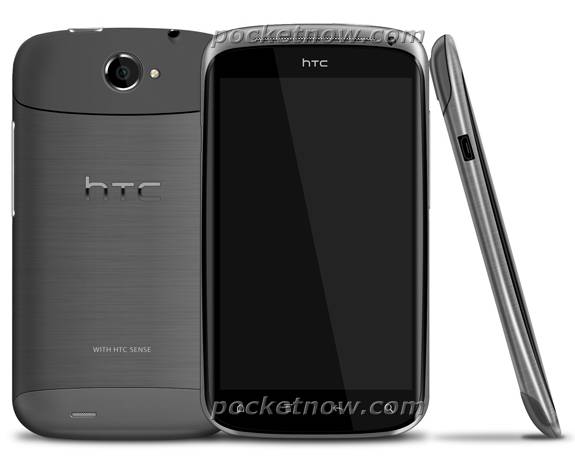 A few weeks back we got our first hint and glance at the upcoming HTC Ville but we only received a very generic rendered image and some details including Android 4.0 ICS and a super thin profile. Today we have our first official look at the HTC Ville — and it looks quite stunning although it still features capacitive buttons.

According to sources from PocketNow the HTC Ville will be the thinnest device yet from HTC and has some pretty impressive specs too. While we don’t have a quad-core like the recently leaked HTC Edge it should feature a 1.5 GHz dual-core processor and a qHD resolution display. Not any qHD but an AMOLED panel too. Pair that with a 4.3″ screen and an 8 megapixel shooter on the rear it sounds like some of their more recent smartphones. With those specs it might come sooner then the supposed April launch.

Looking much like the Nexus One and the HTC Sensation this new HTC Ville has a pretty standard to HTC design, but that isn’t a bad thing. The report also claims it will come in under 8mm thick — making this the sleekest and thinnest HTC handset to date. For a comparison the DROID RAZR is 7.1mm and the Galaxy S II is 8.4mm give or take (hump and all).

We don’t have any additional details regarding what OS we can expect but if this hits the streets soon it should be Android 2.3 Gingerbread. If we don’t see the Ville til April 4.0 ICS seems much more likely. Just because we have capacitive buttons doesn’t mean it wont launch with Android 4.0 ICS, remember that. When we hear or see more we’ll be sure to update with the news.