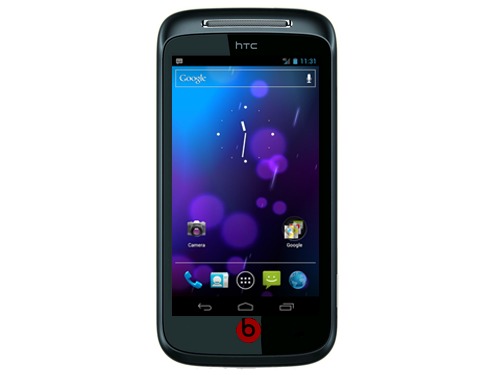 HTC had a really strong year in 2011 thanks to Android, and they look be starting off great with this new phone for 2012. With an event scheduled for Mobile World Congress 2012 in Spain, and a few leaked devices lately we are expecting some impressive announcements. Today we are hearing some interesting details about an upcoming mid-range phone powered by Ice Cream Sandwich called the HTC Primo.

The image you see above is being reported as a press render that was shown a few times to stuff.tv and while it looks nice — its the specs that make this important. The HTC Primo is rumored to sport a 3.7″ qHD AMOLED display, a decent 1.0 GHz dual-core Qualcomm processor with 512MB of RAM under the hood. With quad-core and 1.5 GHz dual-cores being the top end this comes right in around the mid-range level with the slightly slower speed and less RAM — but should still be extremely powerful.

Other specs include Gorilla Glass, Beats Audio integration now HTC owns part of that brand, and even a 5 megapixel camera around back with 720p video recording all for a great price. Leaks are suggesting around $250-$300 here in the states making this phone very affordable with a new 2-year contract. To wrap everything up and seal the deal this phone will be coming with Android 4.0 Ice Cream Sandwich if you couldn’t tell from the image above.

While HTC’s mid and low-range phones lately have been quite poor with single-core slow processors — something with an AMOLED display, the latest and greatest version of Android, and a dual-core processor for that price could be extremely popular. I just hope they take that Beats logo off the front and put it on the rear. Hopefully we’ll hear more from HTC at MWC 2012 next month.