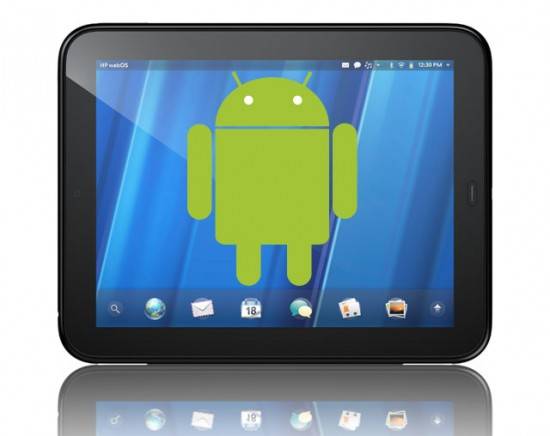 The HP TouchPad was the extremely popular webOS tablet from HP this year right? No not really, but once HP announced that they were retiring the brand and they’d no longer continue with the TouchPad series it quickly because the hottest selling tablet I’ve seen in a while. Now that the HP TouchPad is extremely affordable at only $99 for the 16GB and $149 for the 32GB (if you can find them in stock anywhere let us know) they are now attracting tons of attention. Users everywhere are snagging them up hoping to soon run Android on the dual-core tablet.

Yesterday we mentioned that a few developers have already started porting Android to the TouchPad and are calling it TouchDroid but now today we have even better news. New details are coming out from a YouTube video where one user is claiming to already have Android 2.3 Gingerbread running on the TouchPad and will unveil full details and instructions on August 24th, that is in two days on this Wednesday. Here is that video teaser below.

While that is only a teaser we also have a second video to show you today. This is Android 2.2 FroYo pre-installed running on the HP TouchPad instead of webOS. We don’t have a lot of details on this next video the sources are claiming it came out of the box with a ubuntu build and was in fact booting to Android 2.2 stock. That is extremely interesting and a bit odd to say the least.

Looking at that video it appears to still have the plastic on the device. It is running on Android 2.2.1 FroYo and at first boot we see the Qualcomm Innovation Center boot logo, also known as QuIC. These two videos are definitely causing a stir in the Android developer community and is peaking my interest to say the least. While I’ve still not bought one I did try to snag one at a few online retailers that accepted my hard earned dollars but they quickly returned it and said they were out of stock. Sound familiar anyone?

Hopefully we see more details in the next day or two regarding either of these videos as the entire HP TouchPad and Android news continues to climb. Stay tuned for more details.