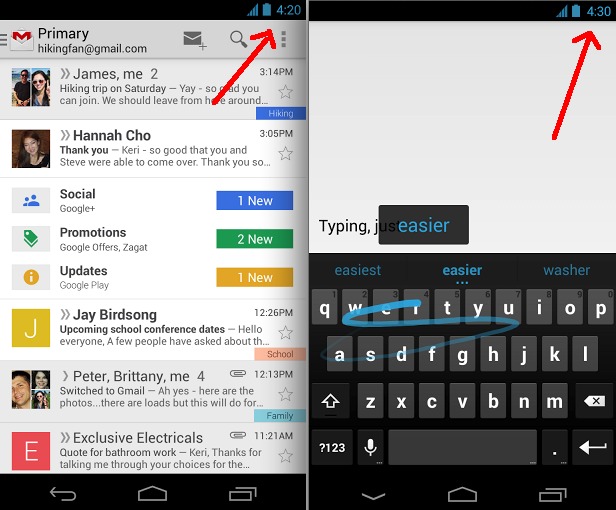 While this might be a stretch, what we’re about to mention below is obviously Google teasing us. Google has been busy lately updating many of their key apps to work with ease across all versions of Android. As well as improve features, options, and more. From Google Search and Google Now, Gmail, Chrome Browser, Google Music, and even today they’ve released Google Keyboard to the Play Store for all.

Many might already know this little tip we’re about to share, but if not, prepare to let the rumor mill run wild a bit. Google has been putting the Android OS version nicely and casually as the time (clock) on the screenshots they upload for that particular app to the Play Store. If you look at Google Maps in the Play Store, their screenshots giving you a preview of the app all have the time listed as 4:10. Or as I see it, Android 4.1 Jelly Bean.

Every application as of late that Google has updated and released to the Play Store has the clock listing Android 4.2 (or 4:20) for the time. The latest Gmail, the brand new Calendar that was just updated, Google Hangouts that was announced at Google I/O, Google Drive and more. They all show 4:20 on the clock. Since that’s our latest version of Android. Not all of their apps do this. Google Music shows 11:53, and Google Search shows 4:00 so this is a little stretch, but clearly not an accident.

However, with today’s release of the Google Keyboard we’re seeing the first Google app as of late showing a different time in the clock. What would that be? 4:30. Or as I see it, Android 4.3 Jelly Bean. There really isn’t anything of importance here, and maybe there’s just a system behind closed doors in which Google does their screenshots, but we think they’re having fun at our expense here.

We know Android 4.3 Jelly Bean is coming. It’s been spotted in server logs, seen on a Nexus 4, and mentioned multiple times in leaks. The latest report suggested Google will release it come June 10th, but that’s slowly looking pretty unlikely about now. At the same time dropping an update on the same day as Apple’s big WWDC event could be fun.

What do you guys think? Are they teasing 4.3 is coming soon, or are we just a little overly excited here?