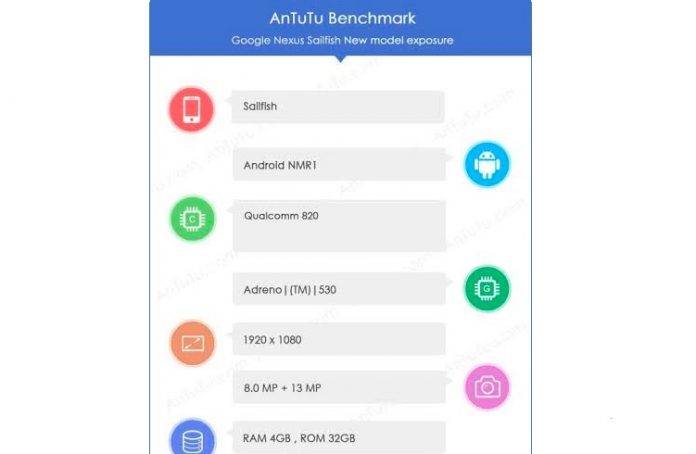 If not catching Pokemon, some people in the Android community are busy trying to catch “fish”. We’re talking about the next Nexus phones HTC is believed to be working on for Google. The Nexus Marlin and Nexus Sailfish have been regulars at the rumor mill lately. For now, let’s focus on the smaller model. The Sailfish was recently spotted on AnTuTu with some specs listed by the benchmark site.

We no longer doubt that HTC will be manufacturing the new Nexus phones because the Taiwanese giant has a good working relationship with Google. We’re hopeful that this partnership will help HTC get better numbers. The ailing company is in dire need of a hand and Google is in the best position to do so. HTC has an edge now since the two new Nexus phones are believed to be manufactured by the OEM. There’s no other brand the Android execs partnered with or this year’s Nexus duo–only HTC.

Turning up in the benchmarks are the following details: some Android NMR1 will be powered by a Qualcomm 820 chipset, Adreno 530 GPU, unknown screen size, 1920 x 1080 resolution, 8MP front-facing camera, 13MP rear camera, 32GB internal storage, and 4GB RAM. Screen size could be 5-inches based on a previous leak while battery could be 2770 mAh.

The HTC Sailfish should also have a Bluetooth 4.2, USB-C port, fingerprint scanner, and bottom-firing speaker according to earlier leaks. The Nexus is expected to arrive with the bigger HTC Marlin. Let’s wait and see for more leaks and teasers before the official launch hopefully in October.