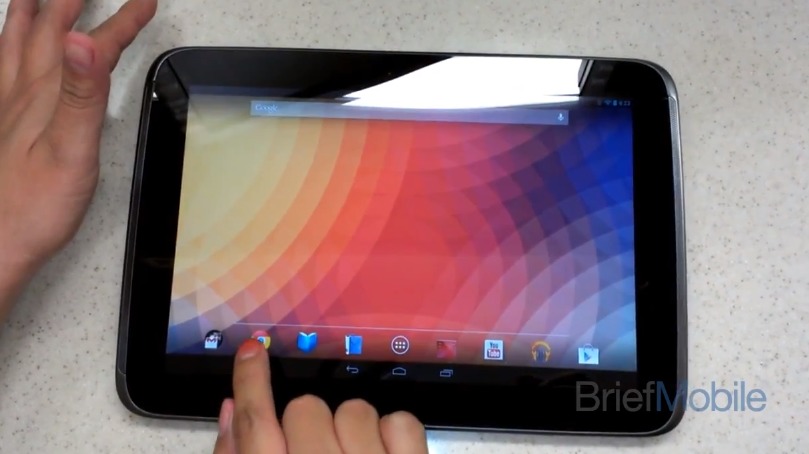 Well, well, well, what do we have here? Looks like the Samsung made Google Nexus 10 tablet has decided to pose for a quick video showing off that glorious 2560 x 1600 HD display and Android 4.2 Jelly Bean. The video is a “teaser” in every sense of the word. Being only about 5 seconds in length, but we figured you’d all enjoy it so take a peek below.

The folks from BriefMobile have a leakster that is being kind enough to share tons of pictures, screenshots, and now video apparently of Google’s unannounced Nexus 10 tablet. Google was set to announce their new 10-inch slate Monday Morning at their Android event in NYC, but sadly this afternoon they’ve canceled their entire Nexus unveiling due to unsafe weather conditions. Thanks Hurricane Sandy. (Sad Face)

Without doing much talking, we’ll just let you guys enjoy the video below which happens to end way way too soon. We only get about 5 seconds and quickly get a glance at the rather bland unlock screen, followed by the leakster launching Google’s Chrome Browser — then sadly it’s over and the excitement ends just as quick as it started.

Rumors have basically been confirmed that the Samsung and Google Nexus 10 will sport a 10.1-inch 2560 x 1600 stunningly high resolution HD display, Android 4.2 Jelly Bean, and will be powered by the exciting and brand new Samsung Exynos 5250 1.7 GHz dual-core processor — which is faster than all the quad-cores available today. It sports 2GB of RAM, 16GB storage, HDMI-out, a 5 megapixel rear and 1.3 1080p front camera, WiFi, Bluetooth, NFC, and something that many didn’t think — GPS. They’ve uploaded a screenshot showing this indeed does have GPS.

The leakster also is reporting Samsung’s used a polycarbonate constructions for the device hardware. Stating that it looks like brushed aluminum, but in fact isn’t. Polycarbonate will make the back feel excellent, be durable, yet extremely lightweight. The same material is what Nokia’s been using on their new Lumia Windows Phones. We have a feeling a much longer video showing off the Samsung Nexus 10 tablet is coming soon so stay tuned since we won’t be seeing it come Monday after all. Who’s excited for this tablet?