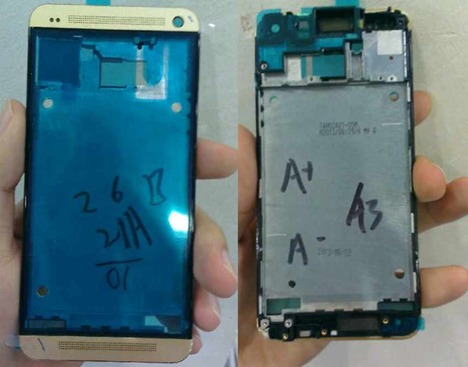 Custom colors are all the rage right now for smartphones. From Motorola offering a completely customizable Moto X, to the iPhone 5c announced earlier this week with multiple color options. However, now that Apple unveiled their new Gold iPhone 5S, we’re starting to see pictures emerge of an HTC One sporting a similar color.

Lately HTC has been going crazy with their HTC One and that aluminum shell. Offering the smartphone in silver, black, and eventually red. Then last week they revealed a Vivid Blue HTC One for the UK, and a Metallic Blue version for the US. And now it looks like they have one more up their sleeves.

If these recently leaked pictures are accurate, we’ll be seeing an HTC One in Gold or Champagne coming soon from the manufacturer. These external casings have leaked in the same fashion as the blue model last month, so hopefully we’ll learn more soon.

If you loved the look of that Gold or champagne iPhone 5s that was revealed up on stage, and happen to want an HTC One, you might get the same color option later this year. Now that the phone is on all major US carriers, and quite popular in Europe, we’ll gladly welcome more colors. That, and we’d really like to see this HTC One Max that’s in the works.