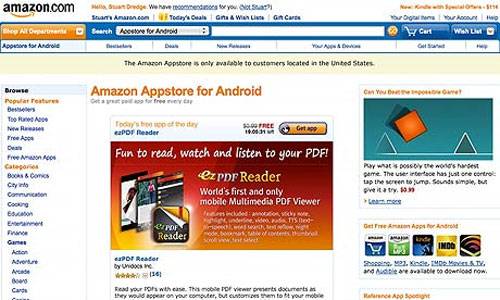 Android developers that are selling their games on Amazon.com’s new Android Appstore have cause to be worried according to games industry body IGDA. The problem that IGDA has with the Appstore terms is that they allow Amazon to change pricing on apps without the developer’s permission among other things. The clause in the agreement with devs that causes concern gives Amazon a choice on how to pay the developer.

The clause states that Amazon can pay the developer either 70% of the purchase price of the game or 20% of the developer’s list price, whichever is greater. “While many other retailers, both physical and digital, also exert control over the price of products in their markets, we are not aware of any other retailer having a formal policy of paying a supplier just 20% of the supplier’s minimum list price without the supplier’s permission,” explains the IGDA’s advisory.

IGDA also notes that an app making it into the 100 most popular and seeing the price cut by as much as 75% might not see enough of a sales increase to offset the loss in sales price. This is particularly true of the apps that are on the bottom of the list. The IGDA also worries that devs accepting these terms will lead to other app sellers adopting similar terms.