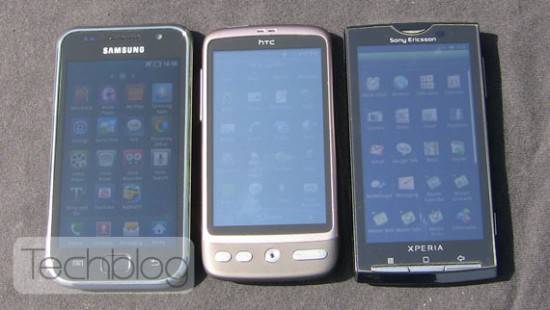 Techblog performed this test with a Samsung Galaxy S, Sony X10 and a HTC Desire. The Desire has an AMOLED screen, X10 has an LCD and the Galaxy S is rocking the Super AMOLED. The clear winner in this test is the Galaxy S, the X10 came in second with pretty good performance out of its LCD screen. The Desire struggled as expected in sunlight.

Being able to use the Galaxy S in direct sunlight is just one benefit of this new technology. It uses less power, colors are more vivid, it has better viewing angles and contrast ratios. The second video, the same phones are tested without being in sunlight and you can see that the Galaxy S still takes the lead. The only weakness the Super AMOLED has is its availability on more phones. Samsung may hold this technology for themselves for a few months before selling it to their competitors. Can you blame them? This screen gives their handsets a huge advantage over the competition.