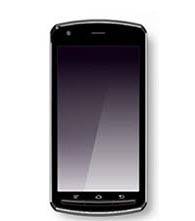 Fujitsu has been making waves in the Android world as of late, due in no small part to their impressively thin ARROWS phone bound for Japan. But the company is also planning a return to the world smartphone market with a debut at Mobile World Congress this month, and if you believe Unwired View, they won’t be coming empty handed. Reportedly the company spoke of a monster phone with Nvidia’s quad-core Tegra 3 SoC, a 4.6-inch display and a whopping 13.1-megapixel rear camera.

Naturally Ice Cream Sandwich is along for the ride, and it’s coming in a semi-rugged chassis that’s resistant to both water and dust. Fujitsu didn’t say anything about ARROW-style thinness, and since it’s also purported to have impressive battery life, we can assume that a slinky frame wasn’t a priority. Based on the tiny thumbnail provided by the manufacturer as a pre-event teaser, you can see that it uses just three capacitive buttons – and that one of them is Menu. That implies that the phone was originally designed with Gingerbread in mind, but of course, the photo probably doesn’t reflect final hardware.

If Fujitsu wants to get back in the worldwide smartphone game, it’s picked a heck of a time to do so. Both HTC and Huawei have already leaked drool-worthy Tegra 3 devices before MWC, and fellow Japanese giant Panasonic has already revealed its high-end Eluga phone set for a wide release. That’s not even counting regular competition from Samsung and Motorola, both of which are probably sitting out MWC when it comes to high-end smartphone hardware. Fujitsu will be on the floor showing off its latest and greatest, so keep an eye on our Mobile World Congress 2012 portal for all the juicy details.