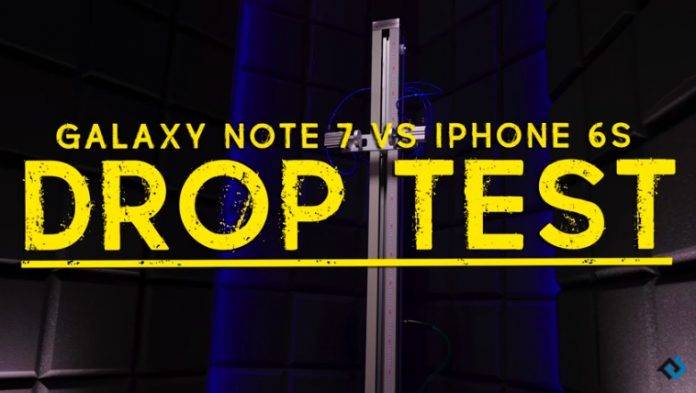 It’s that time when after the launch and commercial release of a new premium flagship device, drop tests are being made. The latest subject is of a series of test by PhoneBuff is the Samsung Galaxy Note 7 VS the iPhone 6S. The two are also pitted against each other for the speed. This is interesting because the previous S7 didn’t do too high but even with the same glass panel design, the Note 7 now has the Gorilla Glass 5.

Corning said it could survive drops from 1.6 meters. PhoneBuff’s professional dropping machine is only one meter so Note 7 was expected to do well. True enough, it did but not without any obvious scratches and damages. As usual, this Drop Test featured four rounds: Back Drop, Bottom Drop, Side Drop, and Face Drop. Watch the video below:

ROUND ONE: BACK DROP
The iPhone 6S suffered only a few minor scratches and scuffs. Meanwhile, the Galaxy Note 7 also saw some scratches. Shattering and cracking seemed to be concentrated on the bottom sides.

ROUND TWO: BOTTOM DROP
Both smartphones suffered few small scuffs only but damages on the Note phablet were more noticeable because of the darker metal band used and perhaps because of the previous drop. The result is a Note 7 with spiderwebs all over the back cover.

ROUND THREE: SIDE DROP
No problem at all so it’s a draw for the iPhone 6S and Note 7.

ROUND FOUR: FACE DROP
The two phones received damages but the iPhone 6S has more scratches. On the Note 7, it’s obvious that the curves are the weak points. On the iPhone 6S, the bottom right corner’s damages look more violent.

Since the two “survived” all four rounds, they moved to the Bonus Round where the phones are dropped until the screens are no longer working. The iPhone 6S was tested first and unfortunately gave up after only five drops. Meanwhile, the Samsung Galaxy Note 7 impressed us by surviving all 50 face drops.

A Speed Test was also done to compare the two. We’re assuming this one was done before the Drop Test. The iPhone 6S is on top of the game beating the Note 5, Nexus 6P, LUMIA 950, Snapdragon Galaxy S7, Exynos Galaxy S7 beating the HTC 10, LG G5, and recently the OnePlus 3.