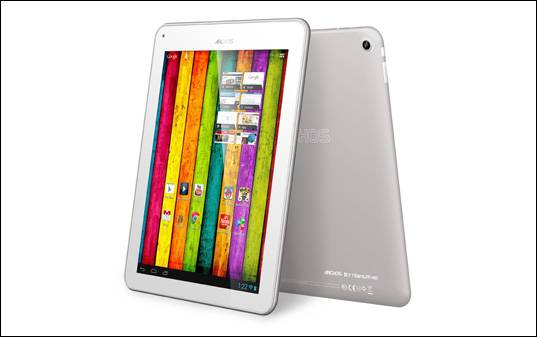 Archos seems to be on a bit of an announcement role this month. We saw the GamePad released back on December 6 and the Video Player app land in Google Play just yesterday. And perhaps coming as a bit more of an exciting announcement, we have word of another tablet. The latest, which has recently made an appearance on the Archos website, is the 97 Titanium HD.

As the name would imply, the Archos 97 Titanium HD tablet will feature a 9.7-inch display that is HD in resolution. More specifically, the tablet will have an IPS display with a resolution of 2048 x 1536. Also worth mentioning right up front, the tablet will arrive running Android 4.1 Jelly Bean. Other goodies include 8GB of internal storage, a microSD card slot, 1GB of RAM and a dual-core 1.6GHz A9 processor.

The tablet will also arrive sporting a 2 megapixel front-facing camera and a 5 megapixel rear-facing camera. So far we have yet to hear anything from Archos in terms of a release date or price. Not to mention, which markets would be getting this particular model.

Otherwise, the 97 Titanium HD arrives as the latest tablet in the Archos Element lineup which also includes the 97 Xenon and 97 Carbon as well as the 80 Cobalt. And while we would expect Archos to begin pushing tablets with Jelly Bean, it is interesting to see them make the jump in mid-lineup — the previous three Elements tablets were released (and remain) with Ice Cream Sandwich.