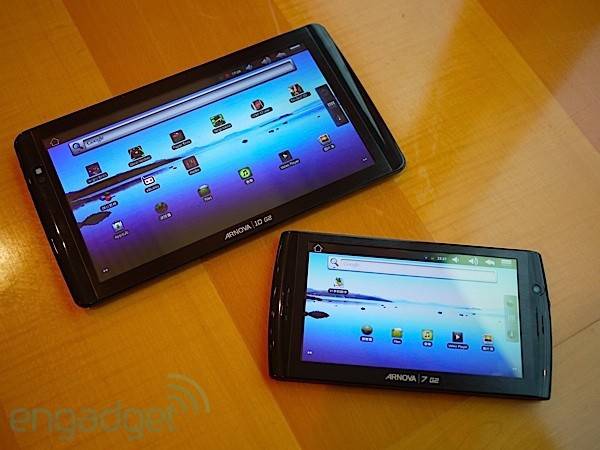 While we first saw these tablets back in February there has been some recent action at the FCC from a few different Archos Arnova tablets. We saw the Arnova 8″ hit the FCC last week looking good in the process, and even the 7″ was at the FCC with a redesign.

While these tablets might not have the build quality of the Galaxy Tab or the Transformer they do come in at a lower price point. Sadly we don’t have Honeycomb on these tablets instead they are rocking Android 2.3 Gingerbread. Not to be confused with the G9 series with Honeycomb.

These do however come with upgraded screens and are now capacitive touch for a much better experience, as well as having 1GHz ARM Cortex-A8 processors to keep things speeding along. For now the Archos Arnova 7 and 10 G2’s are only in Hong Kong and while no official pricing has been released were are hearing $199 for the 7″ and $249 for the 10″ variant. While Gingerbread is nice I’d rather have Honeycomb, first thing I’d be doing if I bought one was installing ADW EX Home Launcher because his recently tablet improvements would really help the overall user experience. We will report back when we here more details on launch date or official pricing.