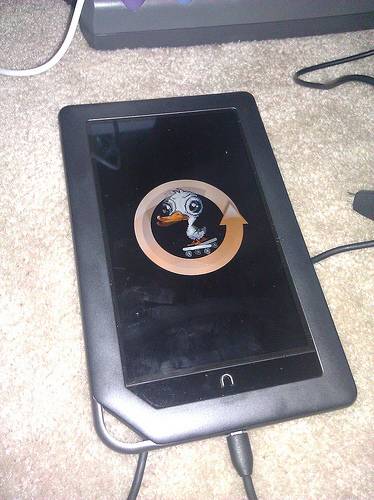 We all love a good April Fool’s joke. Well, not all of us. Not I, certainly. Not any of us here at Android Community, since we steadfastly avoided the whole mess this year. But if you’re a frequent user of the CyanogenMod family’s nightly ROM updates, you may remember their 2011 joke: changing the name of the ROM to “TehUberDuckDistro” for a single nightly release, and replacing the familiar skateboarding Android with… well, a creepy-looking duck. All in good fun, right? Well for a few flashers, either they didn’t get the joke or they’re really out of date: 29 users of TDUD are still around and logging info with CyanogenMod’s built-in reporting app.

Yup, 29 people are using a nightly release that’s now just over a year old, and was never meant to be taken seriously – that duck is just way too creepy. Writes CyanogenMod team member Ricardo Cerqueira:

I accidentally noticed, while checking something entirely different in our stats data, that 29 people are still running TDUD today. That one year-old, one-shot nightly is still in use, and I want to meet these 29 people just to shake their hands.

TehUberDuckDistro was only ever available for a single night. Either there’s a small but incredibly dedicated population of duck fans who also love Android custom ROMs, or there are about thirty people who really need to update their version of CyanogenMod. But hey, we’re not here to judge: maybe an orange duck theme really brings out the best in Android Gingerbread. Far be it from us to detract from your enjoyment of fowl-flavored Android releases.

Seriously, though. Update your ROMs, guys.