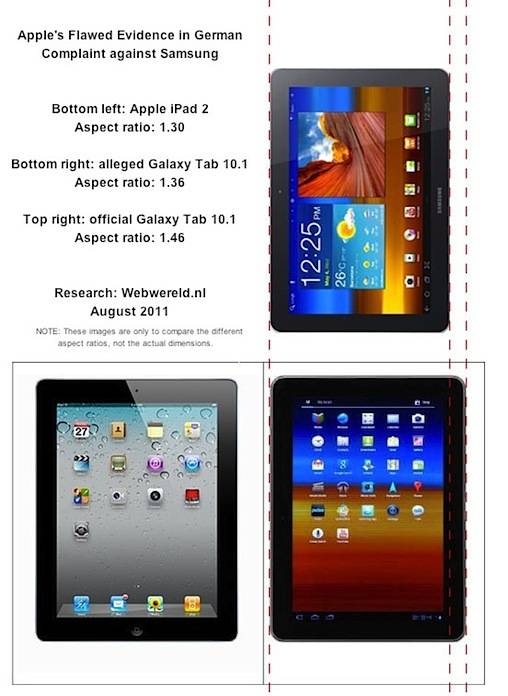 New light has been shed on a sketchy side-by-side comparison photo Apple submitted as evidence in the court case that resulted in an injunction against Samsung’s Galaxy Tab 10.1 tablet in Europe. The photo, meant to demonstrate the similarity between the two tablets, shows a stretched photo of the Galaxy Tab 10.1, resulting in a much more similar appearance between the two tablets.

Apple’s filing for a preliminary injunction on the Samsung Galaxy Tab 10.1 in a German court, effectively banned the Android tablet from being imported to all of Europe. An investigation by Webwereld.nl found modified photos of the Galaxy Tab 10.1 had been submitted to the court as evidence which gave the appearance of a much stronger similarity between Apple and Samsung’s devices.

This new evidence could be a game changer, in Samsung’s favor. Since Apple was the only one able to submit evidence in the filing due to its nature, the truth of the evidence presented takes on particular importance. Hopefully this will lead to Europe getting the same awesome tablet we’re still allowed to enjoy over here.