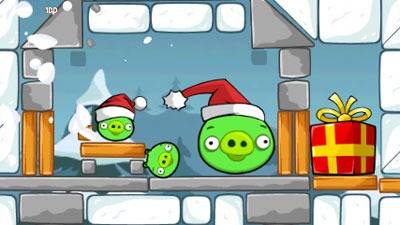 The twitter account for Rovio is a place where Angry Birds users like myself, can get useful information and news on new updates on the game. Their twitter account has just confirmed that the Angry Birds christmas photos that have been floating around the internet, are actually the next installment of Angry Birds.

Their twitter account is now christmas themed with the red bird with a santa hat on, hinting at the release as well. The other day they also happened to mention that more than 7 million Android users have downloaded the application. They were asked if Android would be getting some christmas action as well, and they said they would get their fair share of christmas fun as well. There has been no word on a release date yet, but the official Angry Birds Day(OMG) is planned for December 11th. That would be pretty convenient if they released their christmas version on that day as well. We will keep you updated on the status of this game, for now you can enjoy the halloween version of Angry Birds or the regular version.