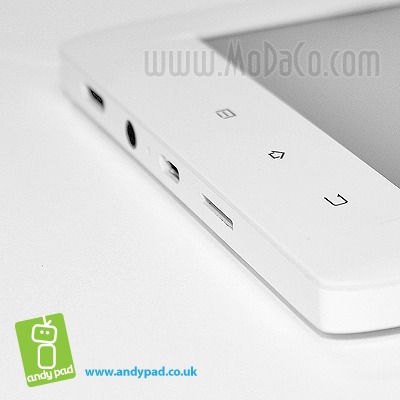 UK manufacturer Andy Pad has released some details about their namesake tablet, set to launch in less than 80 days by their site. At only £200 (around $325 at the moment), Andy Pad is attempting to fill a market gap its seen. From the sounds of the company’s website and a quote given to Newswire, Andy Pad believes the lower end tablet market has many devices which have sacrificed quality to sell for the price they do. The Andy Pad then, while it may not be as feature rich or powerful as tablets like the Xoom or Galaxy Tab 10.1, sounds like it will still be a quality device.

Little is available about the actual device other than that it will feature micro-usb, HDMI, and mini-SD card input, as seen in the photo from MoDaCo.com. It is also rumored to have a 7″ screen, and its website states that it will feature the “latest open source Android operating system,” which would be Gingerbread. Its a safe bet that other specs will be revealed leading up to or on its launch date, 3 days from now. Those specs likely won’t be anything mind-blowing, but Andy Pad seems to have quite a bit of faith in this little guy.

Andy Pad has specifically stated that this tablet will be aimed at a younger generation, presumably young adults. Trying to cram 1080p out and 3D gaming into a tablet for that low of a price point sounds tricky, but Andy Pad says it can be done. The company is UK based, and doesn’t make any mention of when or if they will be selling the tablet internationally. In the end we’ll have to keep an eye on this one. Stay tuned here for more info as it comes in!

Norwich, Norfolk, United Kingdom, 06/13/2011 – UK Andy Pad manufacturers have confirmed that their upcoming tablet will indeed be lower than the £200 rumours.

The manufacturers of the upcoming Android tablet: Andy Pad, have Today announced details of the retail price, following a stream of speculation on social media site; Twitter.

“There’s been a lot of talk about the price” said Andy Pad Business Development Executive George Eastmead “but we’re willing to confirm at this stage that on release, the Andy Pad will market for less than £200”.

No further details have been announced as of yet, although Andy Pad have confirmed that the tablet will feature full 1080p HDMI out, a mini SD card reader & micro USB connectivity.

When pressed about the pad’s unique selling points, George added:
“The Andy Pad is primarily aimed at the younger generation. There are so many poor quality tablets out there that don’t fulfil the job they set out to achieve. what we’re doing with the Andy Pad is providing a tablet computer that can run the 3D games and output HD video at a competitive price.”

The release of this price point signals the company’s intent to provide an affordable tablet which caters to a broad section of the market.

Mr Eastmead’s comment was: “With a high quality spec, we’re expecting the Andy Pad to be both popular with tablet veterans and those newcomers who have been waiting for this chance to dive into the world of mobile computing”.

Andy Pad (andypad.co.uk) is the brain child of Mattressman MD Andrew Kerry. The company has been recognised as one of the fastest growing in the UK and recently gained national exposure via sponsorship of the ITV2 Show ‘Peter Andre, The Next Chapter’.