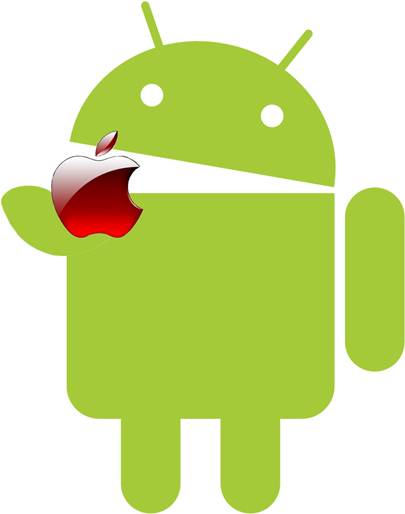 Looks like today the numbers are finally in, again. This time it is something that was well, sort of expected. The Android train has been going ahead full steam for a long time now, and Q4 2010 and Q1 2011 has only got faster and stronger. According to InMobi, the world’s largest independent mobile ad network, revealed its monthly network data analysis findings in its Mobile Insights Report: Global Edition March 2011. They are showing Android ad impression sales has now finally surpassed iOS Globally.

InMobi has the largest and most comprehensive report of its kind is based on data from the InMobi network which serves 31.9 billion monthly mobile advertising impressions to over 220 million consumers. This report now shows Android global ad impression share has surpassed iPhone OS for the first time. Although iPhone OS and Android both continue to capture share on a global basis, over the last few months Android growth has been increasing and has now surpassed that of iPhone OS. 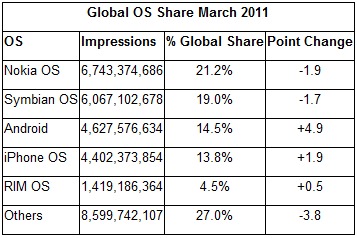 They go on to mention that the global smartphone revolution has been going strong for a while, and with Android getting bigger and stronger in 2011 it is about to take the next step in its evolution. With varied price points and options, android devices are being an ever so popular tool for accessing data, replacing laptops and even desktop computers worldwide.

InMobi also goes on to mention the North American market. That it has increased around 50% in just the last 90 days, and that even though iOS had a successful boost with the Verizon iPhone and captured +9.7 share points. It was the first time they’ve grown more than Android in recent history, but it wasn’t enough and Android still has the lead.

This all comes from the latest ad impression reports from InMobi, so take it as you will. We all can agree that Android has continued to grow into the beast that it is now, and the way things are starting to look there is NO slowing it down. Android will continue to surge worldwide as more and more adopt it. I can’t wait to see what the rest of 2011 holds for Android. We will be here right with you the entire way.