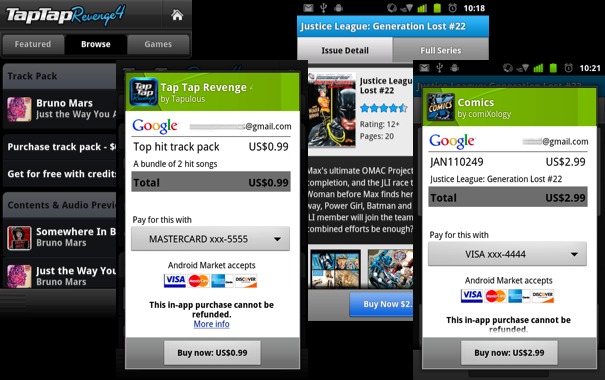 Google has launched in-app billing on the Android Market, allowing developers to offer extra levels in their games, additional services and virtual goods in their apps. The system will also enable try-and-buy, where apps can be offered free to trial and then activated in full without demanding a whole new download.

As you’d expect, Google has worked with a few software vendors in advance to give a demonstration of how the in-app billing system works. Tap Tap Revenge, Comics, Gun Bros, Deer Hunter Challenge HD, WSOP3 and Dungeon Defenders: FW Deluxe have all been updated.

Full details for developers are here, but the key points are that Google still takes a 30-percent cut of every transaction – just as it already does for basic app purchases – and that, since it uses no special APIs, it shouldn’t require too much reworking of code. More on the security side here.