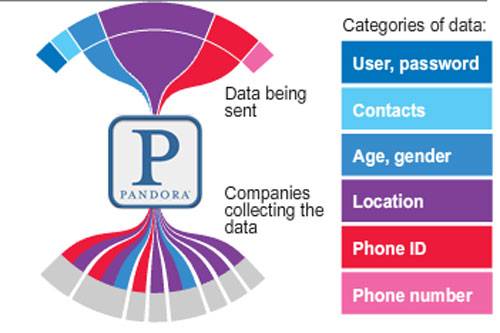 The Wall Street Journal has conducted an investigation into the sort of data apps on your Android phone and on the iPhone collect and share about you. The WSJ looked at 101 popular smartphone apps on both the iPhone and Android devices and found that 56 of the apps transmitted unique device IDs to third party companies without the user’s permission.

The investigation also found that 47 of the apps sent the phones location in one form or another. Five of the apps sent the users gender, age, and other personal details. One app that is popular among both Android and iPhone users that was included is Pandora. The WSJ reports that the app sent age, gender, location, and phone identifiers to various ad networks.

The Android version of Paper Toss also set the phone ID number to at least five ad companies. Both Google and Apple say that they require apps to ask permission to send information to third parties. However, the WSJ reports that these rules can be skirted by app firms. Many of the app developers defend their sharing of info by saying that the data can’t be tied to a person’s name. The WSJ also found that most of the apps have no written privacy policy.