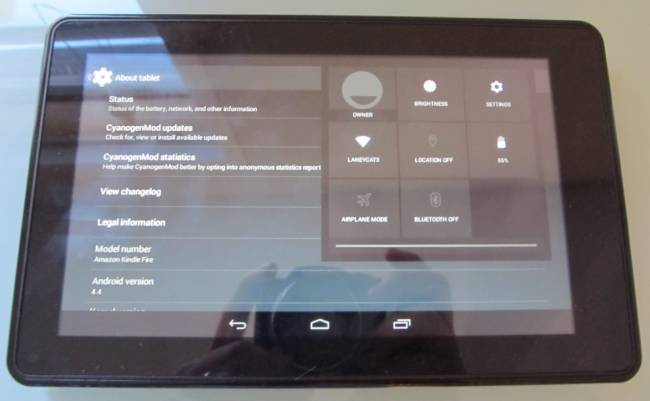 It is probably a testament to Android 4.4 improved resource management, not to mention the Android community’s dedication, when the latest and greatest Android version is successfully ported to much older devices. Such is the case of the very first Amazon Kindle Fire tablet announced back in 2011, which can now run Android 4.4 KitKat.

By today’s standards, the first Kindle Fire belongs in the low-end device spectrum. It runs on a 1 GHz dual-core processor with 512 MB of RAM and 8 GB of internal storage. It’s 7-inch IPS screen only supports a resolution of 1024×600 pixels. The specs sound almost perfect for Android 4.4, which boasts of the ability to run even on low-end devices in the market today. And it seems that it indeed runs quite well, with just a few caveats.

Thanks to the hard work and persistence of XDA member FuZZ__, a build of CyanogenMod 11, which contains Android 4.4, is now available for the device. Overall, it seems that performance is quite acceptable, which is pleasantly surprising given the age of the device and the relatively complexity of a modern Android version. Things aren’t perfect though, as there seem to be some graphical glitches, not to mention a non-working stock browser. But there is a good chance that these kinks will be worked out in due time, if technically possible.

The Android 4.4 port is definitely a work in progress and, as such, is not for the faint of heart to try out. Those that still want to move forward will need to use a custom recovery, such as the latest TWRP, in order to flash the ROM. The usual disclaimers, of course, apply.