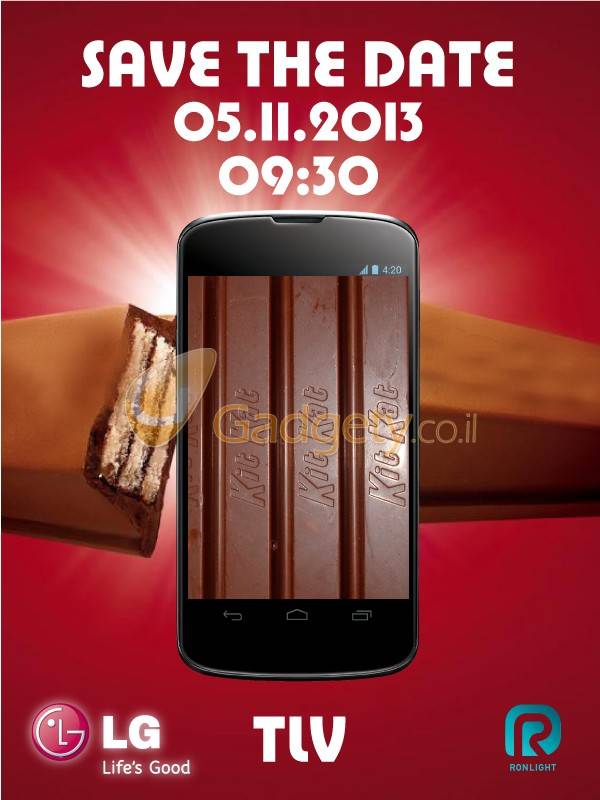 October is almost all but over and still no sign nor shadow of Android 4.4 or its accompanying Nexus 5 smartphone. Whatever the date that Google has truly chosen to unleash its latest products, it seems that Israel will be witnessing the unveiling of the duo next week.

You’re all probably tired from hearing of all the leaks, rumors, and guesses surrounding the latest iterations of the Android OS and Google’s Nexus smartphone, especially when it comes to trying to divine exactly when they will be announced, let alone launched. This latest piece of news comes all the way from Israel, via an invitation that simply tells its recipients to mark November 5 on their calendars for a press conference to be held in Tel Aviv.

Of course, the conspicuous presence of the KitKat chocolate bar, contained inside a Nexus 4 smartphone, is a dead giveaway that it will be about Android 4.4 KitKat. However, it is interesting to note that the invitation came via Ronlight Digital, an importer of LG’s mobile products in Israel. Considering this association, we could be forgiven if we suspect a Nexus 5 also lurking behind the scenes.

It is yet unknown whether this press conference will be a simultaneous event or just a regional unveiling, though it is most probably the latter. So we’re back again at not knowing when Google will finally pull off the covers on these much-awaited pieces of technology. At this point, there is nothing left to do but to patiently wait and, hopefully, be pleasantly surprised.