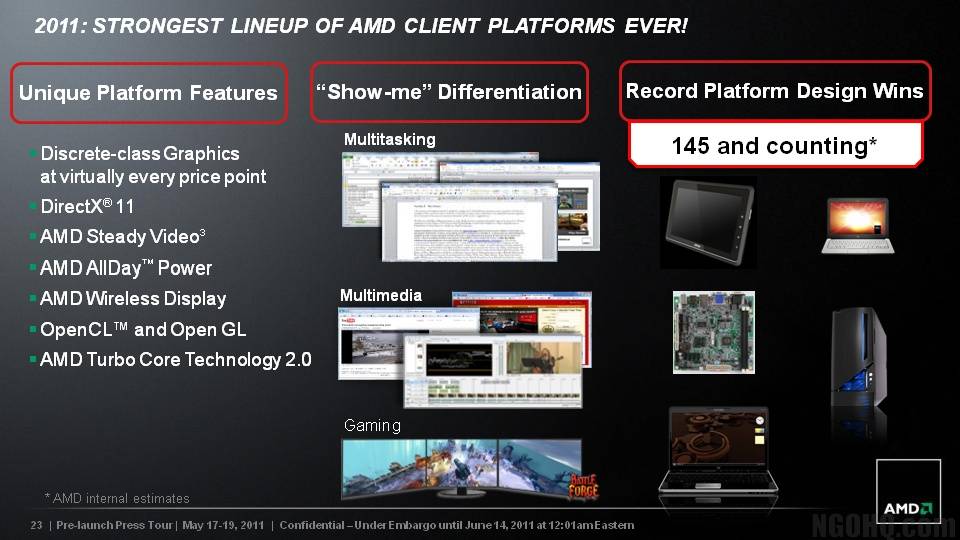 If you’ll remember back a few weeks we had a post up on AMD and their possible move to make chips that’d make some tablet-consumers very happy. Now there’s been one big massive leak of a multi-page roadmap for AMD floating around and what do you know? Tablets are here! The current arena of AMD’s chips contains AMD C-30 and C-50 chips that are straight up aimed at Intel’s Atom chips for notebooks. These new C-series chips include an iterated AMD Radeon graphics core that’s capable of handling 3D graphics acceleration and 1080p video playback. Sounds like its tablet party time.

These processors are not the same as the ones that’ll be coming out via these future plans, but they’re certainly suftboards on which the future is going to roll in on. The NEW set of chips is going to be a Fusion Z-Series and will be code-named “DESNA.” Reminds me of a similar code-naming of future chips we found out about back at Mobile World Congress. Desna chips are, according to these documents, set to support DirectX 11 graphics, Adobe Flash Player video acceleration, and smooth streaming of HD video. Hardware graphics acceleration for Internet Explorer 9, Microsoft Office 10, and Windows 7 visual effects are included too, which makes us think that they’ve got at least part of their vision set for Microsoft.

On the other hand, there’s always room for Android, right? Also as liliputing notes, Desna will certainly need to have low power consumption for long battery life in combination with high power if AMD hopes to compete with tablets using next-generation Intel Atom Oak Trail chips or ARM-based processors. What do you think, does AMD stand a chance?

Also check out the rest of the sheets here: