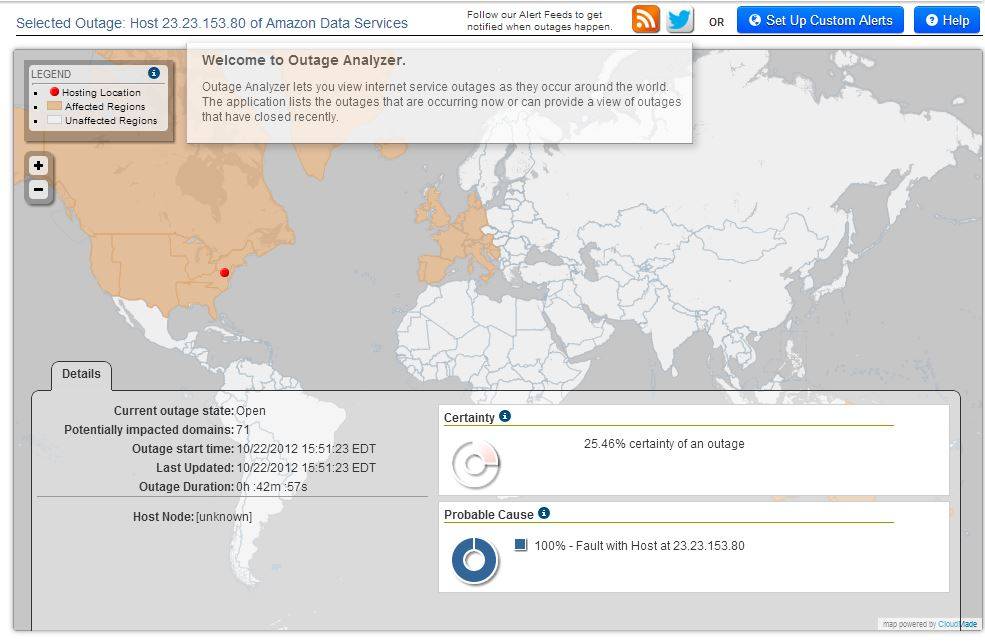 Amazon‘s cloud services seem to be struggling a bit today, as our friends at SlashGear are reporting that a failure has brought down a number of huge sites like Netflix, Reddit, Pinterest, and Foursquare. The outage, according to Amazon’s own Web Service Dashboard, looks to be the fault of Amazon’s EC2 services, but we’re pleased to say that things are getting better. Whereas before, EC2’s status alerted that “new launches for EBS backed instances are failing,” at the moment, the status is “Degraded EBS performance in a single Availability Zone.”

So, things are getting better on Amazon’s end, and indeed, Reddit and Pinterest have returned from the ether, ready to help you waste all sorts of time yet again. We’re not sure exactly what’s going wrong over at Amazon, but this isn’t the first time something like this has happened. Before, similar outages were blamed on overheating and automatic shutdowns, so perhaps the same thing is happening again today.

In any case, we’re not out of the woods yet, and we won’t be until Amazon’s status for EC2 reads that the “service is operating normally.” Outage Analyzer says that 71 different domains are potentially affected by this outage, and as we can see from the list of victims, some of the Internet’s most popular websites and services are included in that group. Outage Analyzer also says that there’s 100% chance the outage is due to a “Fault with Host,” so there seems to be no question that this was caused by problems on Amazon’s end.

At least things seem to be getting resolved quickly. If your favorite site is one of the big ones that have been claimed by this outage and it still isn’t up, it doesn’t seem like it’ll be long before service is returned, but then again, you never really know with things like these. Keep an ear to Android Community, as we’ll update you if Amazon make a statement on this particularly nasty outage.