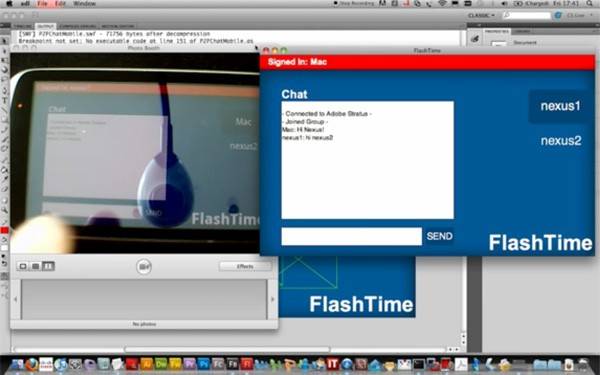 So, video calling is a big thing now a days. With Apple’s own variation out and about, and the EVO 4G doing quite well for itself with its own front-facing camera, and considering there’s still more devices coming down the pipeline with the hardware, we can figure that a lot of companies out there are going to want to get into the action. Adobe is no different. And, after titling their new software platform FlashTime, we imagine that they’re obviously
just going for the jugular here. We welcome the fight.

FlashTime is built with the still incoming Air 2.5, and it’s built to a be a peer-to-peer video calling application. Instead of having a camera specifically built for video chatting, it’s the other way around. The software will just use whatever camera you have, which doesn’t make that much of a difference, but it’s worth a bullet point.

The real point here is the fact that it’s using Flash, and that means that it’s going to be able to do cross-platform easily enough, as well as make it onto new versions of Android just as easily. So, no losing the ability just because you change phones (hopefully).