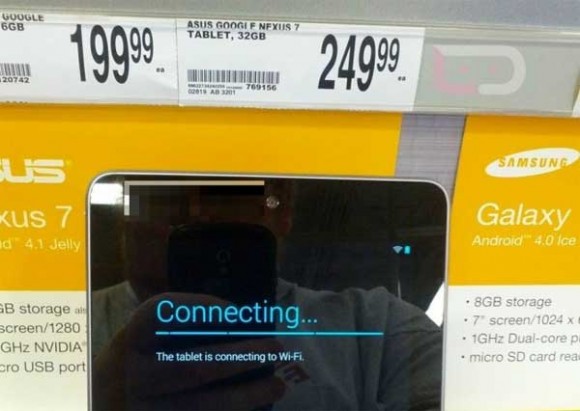 The 32GB Nexus 7 has been in the news quite frequently this month, and we thought that was going to come to an end today with one last official story from Google. However, Google was forced to cancel the event because of the impending hurricane, so we are left to hear more rumors about the 32GB version of the tablet. Thanks, to Office Depot, we now have an official price of $249.99.

Many buyers are reporting that some Office Depot locations have stock of the 32GB tablet on hand. Your results may differ, but some people have been able to walk into an Office Depot and walk out with a 32GB Nexus 7 over the weekend. It appears as though no hurricane is going to stop Office Depot from selling those 32GB tablets.

A rumor that has come up time and time again is that the 32GB version would also have cellular data. Based on this photo, it doesn’t look like that’s the case. It doesn’t explicitly say it doesn’t have cellular data, but chances are great that if it did, that would be printed somewhere visible. At this point, it would appear that 32GB version is still just Wi-Fi enabled. Perhaps Google was going to announce a separate cellular model at today’s event, but we will have to wait and see for that.